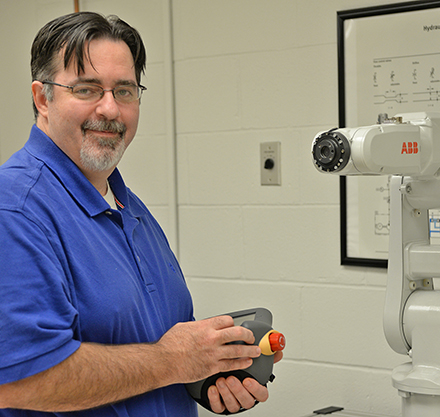 Jason White tried to avoid the family business. But, he found out it was in his blood.

White had a passion for cooking. Upon graduation from Greenwood High School in 1993, he enrolled at Johnson & Wales University in Charleston and became an executive chef. The idea of being a chef seemed glamorous at the time, but White found out it involved a lot of long hours and took him away from his family. After 20 years, he found he had lost that passion and wanted to pursue a different career.

White spent the last several years of his culinary career looking for a new path. His search led him to a program at Piedmont Technical College, and a new career and skillset he could be passionate about.

“My love always came back to making things and building things,” said White. “When I decided on a new focus, I found the mechatronics program. It involved things that excited me like robots and general electronics.”

White woke up one morning and decided to go to the admissions office at Piedmont Tech to find out what it would take to return to college. When he left, he was enrolled in the mechatronics program.

“I am totally happy with the choices I’ve made,” White said. “Everything I’ve learned about the curriculum has made me more excited.”

“There’s a huge amount of overlap in the programs,” he said. “Electronic engineering technology focuses more on the theory behind electronics whereas mechatronics students must have a mechanical background and an electrical background.”

White said the two programs will blend well, especially with his goal to eventually teach.

“I’m hugely passionate about mechatronics. When I go home, I go to my own electronics lab and build robots and learn beyond the curriculum of the school,” White said. “There is a passion there I never actually had for culinary arts.”