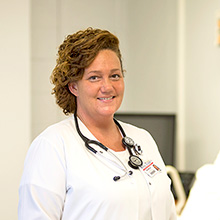 For Newberry resident Michelle Burns, becoming a nurse has been a dream since childhood. But like many Piedmont Technical College students, she had to delay that dream until later in life.

In May, as she prepared to walk across the stage to receive her degree, she shared her story with the crowd as a reminder that “it’s never too late to follow your dreams.”

And though she took a different path, Burns’ journey starts where many college stories do.

“Upon graduation from high school,” she said “I became a certified nursing assistant (CNA) which further fueled my passion to provide quality, loving care to those in need and to make a difference in their lives.”

Shortly after becoming a CNA, Burns married her husband and enrolled into college to pursue a degree in nursing. However, two weeks into the program they found out they were expecting their first child.

“At that point, I wanted nothing more than to give my daughter a good start in life,” Burns said. “So, my husband and I decided that I would stay at home with the agreement that one day I would return to school.”

As years passed, the couple had another daughter. They also enjoyed an active church life, which eventually led Burns and her husband to move from Spartanburg to Newberry to found a new church. “We sold our home and put everything into following our calling, and founded the Fountain of Life with the help of our pastor and his wife,” Burns said.

Life remained too busy for Burns to pursue her dream. But with the move to Newberry, she often found herself at home alone in a new town where she knew no one. Her children were at school during the day and her husband was at work. She started to realize, though she had reservations, that it was time to pursue the degree she had always wanted.

“I spoke to my husband and told him I felt the time had come to follow my dream and I began Piedmont Technical College,” she said.

Burns started her degree at the college’s campus in Newberry County where she was able to complete her pre-nursing requirements. After being accepted into the nursing program, she completed the remainder of her coursework in Greenwood.

Burns is the recipient of the 2017 Distinguished Student Award for nursing and has served as a presidential ambassador for the college. She was also selected to be one of four student speakers for PTC’s May commencement ceremonies.

As she stood on the stage and addressed the audience, Burns acknowledged the huge role her family played in her accomplishment.

“This journey has not only been a sacrifice for myself, but also for my family,” Burns said” My husband, Jay, has been my stronghold. For every ‘I can't’ he simply said ‘you can’ and ‘you will.’”

“My daughters, Sabrina and Makayla have sacrificed so much to help me achieve my dream and never uttered a complaint,” she added. “I hope that through this journey, I have shown them that with hard work, commitment, and dedication, anything is possible.

This summer, Burns completed and passed her National Council Licensure Examination (NCLEX) and is now a registered nurse.