Fulfillment and a New Beginning at PTC 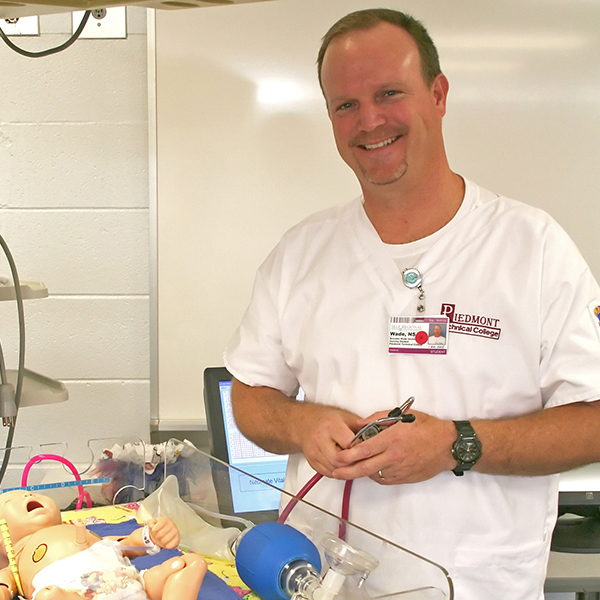 Like many other people in our region, Wade Nicholson has had to reinvent himself over the course of his career.

After earning a bachelor’s degree and working in a successful manufacturing career, Nicholson was forced to re-examine his career path during the recent economic downturn.

Piedmont Tech offered him an avenue to make a career change in an affordable, accessible way.

After graduating from PTC in May 2011, Wade is now working as an R.N. in the Progressive Care Unit at Self Regional Healthcare.

Piedmont Tech: What was your background before you enrolled at Piedmont Technical College?

Wade Nicholson: In 1994, I got a job with Milliken as a production associate rotating shifts at the Saluda plant. It didn't take long doing that until I realized I needed to go back to school and get my degree. So I transferred over to a mini-shift in the evening and enrolled at USC Aiken. I graduated in 1996 with a bachelor's degree in biology and exercise science.

After graduating from USC, I was offered and accepted a job as a manager at the Saluda plant, and over the next twelve years, I worked in a variety of positions, including production manager, supply chain, process improvement, and eventually I was the plant maintenance manager.

What made you decide to come back to school?

When the economy took a nosedive and companies began to do what they could to survive, I, like many people across the country, was laid off. It was a very trying, and, to be honest, scary experience.

I thought of myself as a non-traditional college student, but what I've actually learned ... is that there are literally hundreds of people coming to the College like me.

Did you think about getting another job in your field?

I debated going back into manufacturing, but with the real potential of having to relocate, my wife and I decided that now was a good time for me to make a career change. I was looking for a profession that not only had a bright economic future, but one that I could have personal fulfillment in, as well. With my educational background in biology and exercise science, I knew I wanted to do something in health care.

How did you decide to pursue Nursing?

Through the help of my local South Carolina Employment Security Commission and the OneStop office, I applied for and was awarded funding through the WIA program and Lottery Tuition Assistance. With this financial support, I enrolled and started at Piedmont Tech in the spring of 2009, and with a lot of hard work and guidance from faculty over the next seven months, I made the decision to make nursing my career choice.

What would you tell people about your experience at the college?

I feel blessed and privileged to have been given this opportunity at this stage in my life. I thought of myself as a non-traditional college student, but what I've actually learned since coming to school [at Piedmont Technical College] is that there are literally hundreds of people coming to the College like me. They're either making career changes or they're simply working parents who are trying to make a better future for themselves and their families. Piedmont Tech allows us to do just that--to pursue our dreams. And for that, I'm grateful.