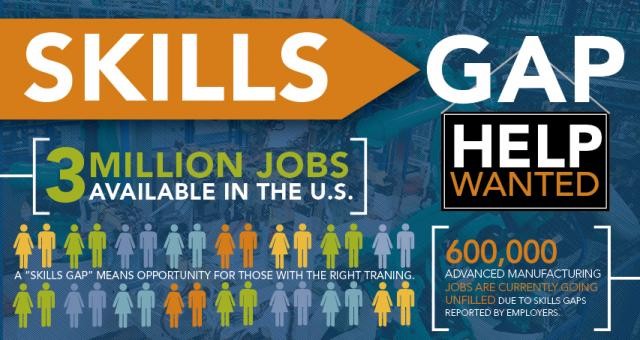 In a recent piece on 60 Minutes, Byron Pitts says it's true, and it's due to a skills gap widely reported by employers.

You may have been hearing about the "Skills Gap" for a while now, but what is it?

Put simply, it’s the difference between the skills an employer says a job opening requires and the skills an applicant has. It’s a problem that employers say has been growing for years now, and many say that it’s getting worse as companies are hiring to replace skilled workers who are retiring.

It’s an even bigger problem for companies trying to ramp up new operations quickly.

Jobs Right in Your Backyard

Although the 60 minutes story is based on the job situation in Nevada, employers closer to home, right here in our region of South Carolina, are having the same kind of problem.

According to statements made at a recent panel hosted by GSA business, ZF Transmissions, a company that has made major new investments in our area say they’ve been struggling to find enough skilled workers to meet their staffing needs.

But their situation isn’t unique in our area.

What Kind of Jobs Are Out There?

In our region, we're primarily talking about jobs in advanced manufacturing, like CNC machinists, Mechatronics and Maintenance Technicians.  In a recent announcement, a human resources manager at ZF said that they, alone, expected to hire more than 200 people in the first quarter of 2013.

We have graduates coming out of school here after just two years earning $60,000 salaries.... I don’t think the public is aware of the opportunities in this area.

So where’s the disconnect?

One problem, according Keith Lasure, the Dean of Engineering and Industrial Technology here at Piedmont Technical College is that many people still think of manufacturing as it was 50 years ago.

“They don’t realize that it’s changed into a high-tech, advanced industry requiring skilled and talented people,” he says.

Many of them don’t think of manufacturing as a career path at all. But most of these jobs pay well above the average salary in South Carolina.

“We have graduates coming out of school here after just two years earning $60,000 salaries,” he says. “I don’t think the public is aware of the opportunities in this area.”

Targeted Training for In Demand Jobs

Piedmont Technical College offers programs designed to train you for the jobs that employers are looking for right now. And we even have an accelerated program called QuickSkills designed to get you up to speed in just a few weeks.

For those with the right skills, the “gap” means opportunity. As new industry continues to invest in our region, and as existing companies expand to meet new demand, these skillsets are always going to be in demand.