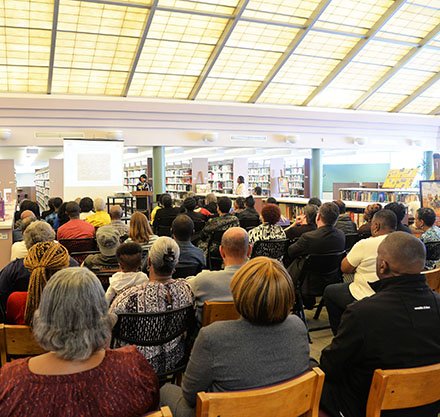 As superintendent of the 89th Operations Group, 1st Airlift Squadron, at Joint Base Andrews in Maryland, Air Force Chief Master Sergeant Stephanie Patterson is proud of her place on the continuum of African-American military achievement. From humble beginnings, the Abbeville native ascended to the highest enlisted rank in the U.S. Air Force, providing executive airlift to world leaders, including presidents and cabinet members.

“It’s important to understand the culture and the adversity that led to transformational change in the military,” Patterson said. “I think our military at this time is the most diverse I have seen. Many brave men and women challenged their assumptions even when it was unpopular … and when they knew that they would never see the change that they were fighting for.”

The senior enlisted aviator with more than 2,500 flying hours shared her experiences with dozens gathered in the Piedmont Technical College Library on Feb. 27 in commemoration of Black History Month.

The particulars of Patterson’s job are highly classified, so there were not many details she could share about her time in the service of former presidents including George W. Bush, Bill Clinton, and Barack Obama. Every flight is considered a military operation.

“I will be honest with you,” she said. “It’s a pressure cooker of sorts. Every detail matters.”

No matter where she travels around the world, “being home is like wearing a favorite pair of shoes. It just fits,” Patterson said, adding that she is blessed to have the love and support of her family. Her ascension within the Air Force began humbly.

“My story is not one of privilege,” she noted. “It is cemented in strong family values and role models.” Accordingly, the story of African-Americans serving in the U.S. Armed Forces is punctuated with heroism, leadership, and trailblazing.

For many decades, Patterson said, the contributions of African-American servicemen and servicewomen have transpired largely “under the radar.” The Army was the first military branch to accept African-Americans, yet they were assigned mostly support roles. Not long after, the Navy began accepting African-Americans. “The Air Force and Marines excluded blacks entirely in the early years,” she noted. “The role of women in the military grew out of necessity. By World War II, women were permitted to serve as nurses in the Army and Red Cross. But after the war, they were discharged. They didn’t get permanent status until 1948, when the Women’s Armed Services Integration Act was passed.”

Patterson concluded with words of grace and inspiration.

“As an African-American, I urge those of you in the audience today to challenge the narrative,” she said. “I am asking that we continue to work hard, build our qualifications, and represent ourselves in a manner that defies the odds, that dispels any notion that we are not capable of achieving our goals. I ask that we all challenge in our own way the status quo. … Find the humanity to recalibrate attitudes and conquer fear.”