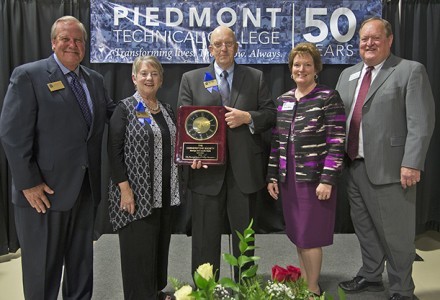 Benefactors and community leaders joined together at Piedmont Technical College recently to celebrate and toast the successes of the past year with the annual benefactors’ event.

Dr. Ray Brooks, president of PTC, welcomed those in attendance. The event was to honor Cornerstone Society members and benefactors who had contributed to the growth and success of the college.

“What we do is critical to the success of lives of the individuals who attend,” he said. “We change lives, we change communities and what you do with your support of the college enables us to do it at a level that puts us up there with the top colleges anywhere.”

“On behalf of the Area Commission, I want to thank each one of the society members who have generously given in the past,” he said. “Your support makes a quality education possible for many of our students.”

The newest members of the Cornerstone Society, Dr. George and Laurie Cone, were introduced. Special recognition was also made for Elizabeth Moss and Mo Scott, two society members who had passed away in the past year.

The first toast of the evening was presented by Charles Williams, PTC Foundation board member and former PTC Area Commission chairman. Williams toasted the members of the Cornerstone Society, an association of friends of the college who support the college through various estate planning tools and techniques. Membership is attained when an individual contributes a minimum of $25,000 by naming the institution as the beneficiary in their wills; making outright gifts of real estate, securities or other assets associated with estate planning; contributing life insurance policies of $25,000 or more; or including PTC in any one of a variety of charitable trust agreements.

“Tonight, we honor all of our Cornerstone members and recognize them for their generosity,” Williams said. “And we thank you for your generosity by providing a future for tomorrow’s leaders in the communities that they serve.”

The second toast was given by Dr. Lex Walters, former president of Piedmont Technical College, to the 50th anniversary of the college.

“A toast to the first 50 years of Piedmont Technical College and to the next 50 years,” Walters said.

Jim Medford, chairman of the PTC Foundation board, presented the final toast to Brooks, recognizing his commitment to the college during his tenure and his dedication to the creation of the Upstate Center for Manufacturing Excellence. Brooks will be retiring in June.

“Ray Brooks has been able to take the strong foundation laid by Lex Walters and build new buildings and new programs throughout the seven county area culminating with what will be built on this campus,” Medford said.