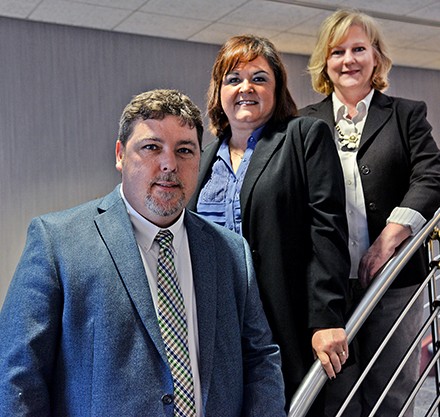 Piedmont Tech Associates to be Honored at State Conference

Three Piedmont Technical College associates have been named Outstanding Educators for the 2015 – 2016 academic year and will be honored at a statewide conference. The three will join fellow winners from sister colleges at the annual South Carolina Technical Education Association (SCTEA) convention later this month.

Burton is the department chair for the human services program, where she has taught for more than 26 years. Prior to coming to Piedmont Tech, she worked for the Department of Health and Environmental Control as a therapist for homebound critically ill clients and also served as director for Meals on Wheels in Greenwood County.

Burton earned her bachelor’s degree in psychology from Lander University and her master’s degree in social work from the University of South Carolina. She also holds a certificate in higher education leadership from USC.

Easler first came to PTC in 2010 following 18 years as a manager for a local credit union. She serves as the administrative specialist for the Health Science Division of Piedmont Technical College, coordinating the administrative needs of the 14 programs within that division.

Easler holds a bachelor’s degree from Clemson University and associate degrees from Florida State University and the University of Georgia. She is currently the treasurer for the SCTEA board of directors

Teague has spent most of his life around the construction business. His father owned a drilling and blasting company in Greenville until health issues forced him to sell it. Following high school graduation, Teague began working for the Upper Savannah Council of Governments as a rehabilitation specialist in the community development division, overseeing construction work in the Community Development Block Grant programs in Saluda, Greenwood, Abbeville, McCormick, Laurens and Edgefield counties.

Wanting a change, he enrolled at Piedmont Tech with the intentions of going into education. He obtained his Associate in Arts in 1997 and his bachelor’s degree in business administration from Lander University in 2002. But, he never lost his love of construction. So, three months after graduating from Lander, Teague came to the building construction technology program under the urging of the program’s coordinator, Bobby Roche, whom Teague worked with at USCOG. In 2013, Teague was named the new director of facilities management at PTC.