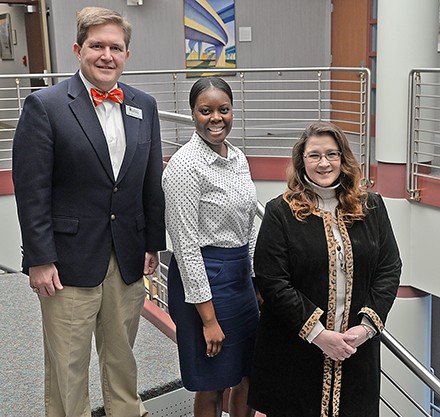 Piedmont Tech Associates to be Honored at State Conference

Three Piedmont Technical College associates have been named Outstanding Educators for the 2016 – 2017 academic year and will be honored at a statewide conference. The three will join fellow winners from sister colleges at the annual South Carolina Technical Education Association (SCTEA) convention later this month.

Jenkins found her love of literature and writing to be her calling as a college freshman. She began her work as an English instructor as an adjunct in 2010 teaching classes for Anderson University, USC Upstate and Piedmont Tech. She became a full-time faculty member at PTC in 2011. Jenkins earned her bachelor’s degree from USC Upstate and her master’s degree from Clemson University.

“I call myself a novice in this field because I work with extremely talented and well-seasoned people,” said Jenkins. “Even though I feel I’m constantly learning, it says to me that someone else recognized my diligence, my passion and that I really want to do well for the college and for my students.”

Johns first came to PTC in 2001 following 10 years at Greenwood High School. She serves as a statistical research analyst for institutional effectiveness at Piedmont Technical College. She is responsible for compiling and disaggregating data for various reports. Johns holds an associate degree from Piedmont Technical College and her bachelor’s degree and master’s degree in business administration from Franklin University.

“I don’t perceive myself as going above and beyond any more than anyone else on this campus,” said Johns. “We all work hard and it’s humbling to know that people see me that way.”

Griggs began his career in research at the Greenwood Genetics Center before coming to Piedmont Tech as a biology instructor in 2008. In 2014, Griggs was named dean of arts and sciences. Griggs holds a bachelor’s degree and doctorate from Clemson University.

“It is an honor to be able to work with this group of faculty,” said Griggs. “It’s easy to be recognized, to do a good job, when you have wonderful people working with you.”