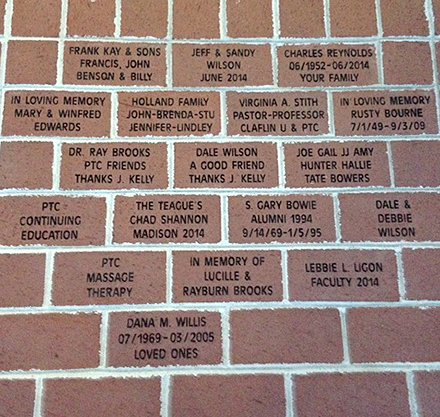 Piedmont Tech Offers a Piece of History in Abbeville

Piedmont Technical College officially opened its new facility in Abbeville nearly one year ago, and now the PTC Foundation is offering an opportunity for residents to leave their own legacy at the campus.

In the historic tradition of a legacy of bricks in Abbeville County, the PTC Foundation is offering residents the opportunity to purchase an engraved brick at the entrance of the facility to commemorate the opening of the new Abbeville Campus.

“Abbeville is a historical brick town, from the court square to the baseball fields,” said Fran Wiley, assistant vice president of development at Piedmont Tech. “We wanted to keep with that historical tradition for the facility.”

Abbeville Court Square is part of the Abbeville Historic District, which is comprised of a large portion of the city of Abbeville. The Confederate Monument is at the center of the square, which is more of a pedestrian mall than a main thoroughfare through town. By the 1940s, the square had been paved with bricks, but in the 1950s, patches of asphalt were added, covering some of the bricks. Due to the efforts of many of the local residents, the asphalt was removed and damaged bricks were replaced by the 1980s.

“The bricks in downtown Abbeville are a legacy to the history,” Wiley said. “We want the citizens of Abbeville to leave their own legacy.”

The Abbeville campus is a 9,570 square foot facility on 10 acres that will allow for any expansion that may be needed in the future. The campus offers six associates degrees and eight certificate programs along with a wide array of general education courses. The facility has a computer lab/library, student common area, a conference room, four PEN rooms, two computer rooms and several traditional classrooms.

“We are so proud of this campus and we want the members of the Abbeville community to take ownership of this facility,” Wiley said. “Purchasing a brick will help transform the lives of the students in Abbeville.”

Photo Caption: The Piedmont Technical College Foundation is offering 4 x 8 brick pavers to raise funds for the programs and services at the Abbeville Campus.