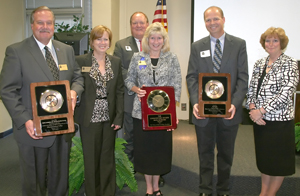 Fran Wiley, Piedmont Technical College Foundation executive director, welcomed those in attendance. The event was to honor Cornerstone Society members and benefactors who had contributed to the growth and success of the college.

“Without what you do, we would not be able to touch lives,” he said.
Special recognitions were made for two long-time supporters of the college. Aaron Industries, Inc. in Clinton and Capsugel in Greenwood were honored with special awards.

“If you look around, you can see the impact Piedmont Tech is having on the community,” said Medford. “The graduates have a sense of pride and a sense of self worth.”

“Piedmont Tech is an integral part of our business,” said Phil Vickery, director of manufacturing operations at Capsugel. “We have the ability to make our work force better so we can compete.”