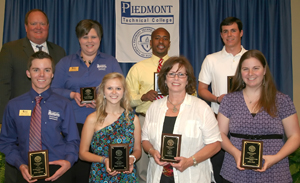 Becky McIntosh, vice president for student development, welcomed students and guests, and Suzy Murray, business instructor, was principal speaker. Students who were listed in this year’s edition of Who’s Who among Students in American Junior Colleges were recognized by David Rosenbaum, associate dean of student services. Carol Paguntalan, director of academic advising, congratulated Presidential Ambassadors for their leadership during the current academic year.

The institution’s most prestigious honor, the President’s Award, went to Kim Ashley of Greenwood, an administrative office technology major. Ashley was also named outstanding graduate in the information technologies division and in her curriculum.

Each academic division of the college honored its top graduate with the Distinguished Student Award. In addition to Ashley, winners were Drew Jefferies of Abbeville, industrial technology; Megan Hawkins of Prosperity, public service; Jamie Roberts of Honea Path, nursing; Julia Hale of Fountain Inn, engineering technology; Landaris Miller of Greenwood, arts and science; and Graham Wright of Greenwood, health sciences. Deans from each major academic division also made presentations to these winners.

Roberts, a practical nursing major, was named as outstanding graduate in her curriculum and was joined by Wade Nicholson of Greenwood, associate degree nursing.