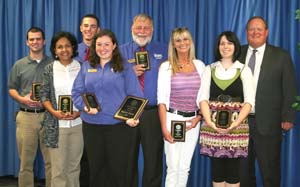 Becky McIntosh, vice president for student development, welcomed students and guests, and Sandy Warner, engineering technology department head, was principal speaker. Students who were listed in this year’s edition of Who’s Who among Students in American Junior Colleges were recognized by David Rosenbaum, associate dean of student services. Carol Paguntalan, director of academic advising, congratulated Presidential Ambassadors for their leadership during the current academic year.

The institution’s most prestigious honor, the President’s Award, went to Kaylynn Knight of Ninety Six, an associate in arts major. Knight was also named outstanding graduate in the arts and sciences division and in her curriculum.

In the arts and science division, in addition to Knight, Truc Tran of Columbia was named outstanding graduate in the associate in science curriculum.

Ling, an associate degree nursing major, was named as outstanding graduate in her curriculum and was joined by Nicole Calhoun of Hodges, practical nursing.