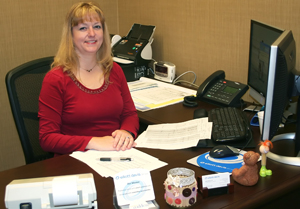 Anita Murphy has discovered that finding your dreams sometimes takes a leap of faith – and a gentle push.

She had obtained her GED after dropping out of high school but she knew she wanted something else. Murphy knew that to go to a four-year college, she would need an associate degree.

“I was working dead-end jobs, fast food restaurants and convenience stores,” she said. “I knew I wanted more, that I didn’t want to work those types of jobs all my life.”

So she enrolled at Piedmont Tech with the intention of pursuing a degree in computers in some capacity. But an accounting class changed her life.

“Teresa Smith was my Accounting 101 teacher and she pulled me aside one day after class and said ‘You really need to change your major’,” Murphy said. “So, I changed to general business with an accounting emphasis because she saw something in me.”

Murphy graduated with honors in 2002 with an associate degree in general business with an accounting concentration. She accepted her first job with Reginald V. Swain, CPA, where she worked for more than two years before taking her current position with Elliott Davis. Murphy has earned certification to be a Certified Payroll Professional (CPP) and a Certified QuickBooks Pro Advisor.

She praised the faculty and staff of PTC for the assistance they gave her and for preparing her for her chosen career.

“I really feel like they taught me well at Piedmont Tech,” said Murphy. “Once I started working, it was more software training than accounting training. I was very prepared.”

Murphy says she wants to eventually pursue her bachelor’s degree and she credits some of that desire to her experiences at Piedmont Tech.

“I think if I’d have gone into college straight out of high school, it probably would have been scarier,” she said. “Most people in their 30s who enter college see all these young people and it’s intimidating.”

Murphy has encouraged her family and friends to consider attending PTC. Currently, one sister is enrolled in the nursing program and the other is looking into some of the programs offered. As a first-generation college student from a lower income family, Murphy says that she tells them not to let anything stand in their way.

“The one big thing most people say is ‘I don’t have the money, I can’t afford it’,” Murphy said. “There are venues out there to help you go to college. You just have to go talk to someone out there and they will help you get in. And once you’re in, you’ll want to stay there.”