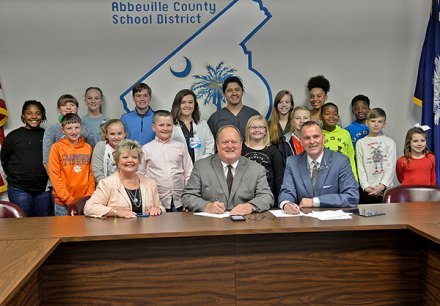 Connor White is in third grade but he’s already told his mother he’s not sure if he’s interested in getting a four-year degree.

The John C. Calhoun Elementary student said the idea doesn’t appeal to him — unless of course he’s playing football for the Clemson Tigers — and a two-year degree seems like a better option.

For Luke Hopkins, a junior at Dixie High School, the choice of what to do after his high school career is more imminent, and he said he’s considering pre-law or pre-med. He’s given a lot of thought to attending Piedmont Technical College for two years after graduating to get a start on his post high school education.

Connor and Luke, along with 15 other Abbeville County students, were present Wednesday when Freshwater Coast Community Foundation Chairman Brad Evans and PTC President Ray Brooks signed an agreement between the foundation and school to formalize details of the administration of the Abbeville Promise.

The Abbeville Promise is a proposed scholarship program that, if successful, would guarantee a free two-year education at PTC to every student who receives a high school diploma while an Abbeville County resident.

“This is an awesome opportunity for us,” said Skip Hopkins, Luke’s father. “It gives them the resources needed to be able to develop skills for careers of their choice. It shows the support of our community, of the school district and Piedmont Tech coming together for the betterment of our community. It’s an exciting time.”

The Freshwater Coast Community Foundation is running the capital campaign, which has a fundraising goal of $1.2 million to fund the scholarship for 10 years.

Lee Logan, a member of the FCCF’s charter board, said the campaign is on course to raise the $1.2 million in time to make the scholarship available to the graduating class of 2018 but could not release the amount of money pledged.

“We couldn’t be more enthusiastic about the early response we’ve gotten, so we’ve just got to keep it up,” Logan said. “I just feel like the community has latched onto the idea. It takes a little while to understand what this is, but once they understood and thought about the benefits, the response we’re getting is they want to enthusiastically be a part of it.”

Evans, who also serves as the chairman of the Abbeville County School District school board, said the organization chose to pursue the scholarship in an effort to improve the quality of life in Abbeville County on multiple levels.

Rusty Denning, PTC’s vice president of economic development and continuing education, said the the scholarship could help attract industry to the county as well as provide individual students with an opportunity they may not have had otherwise.

“It gives students an opportunity to get additional skill sets once they get out of high school,” said Denning, who also serves as chairman of the Abbeville County Economic Development Partnership. “For those who may not be able to afford it otherwise, it will help them to afford those credentials.”

ACSD Superintendent Betty Jo Hall said she’s hopeful the scholarship will be an asset for Abbeville students well into the future.

“This is all about the kids — our students and our future students,” she said. “I think the youngest one here was like 3 or 4 years old, and this will have an impact on that child as well.”

Connor’s sister Emily White, a fifth-grader at John C. Calhoun, and his mother, Nicole Moore, who teaches fifth grade at the elementary school, were also present at the signing. Moore said the scholarship could be a game changer for her family and the community.

“As far as the opportunity it gives to them (her children), I don’t think they fully understand that yet,” she said. “But for me as a parent, I think it’s amazing. I think it’s awesome.”

This story was provided by Conor Hughes and The Index Journal.