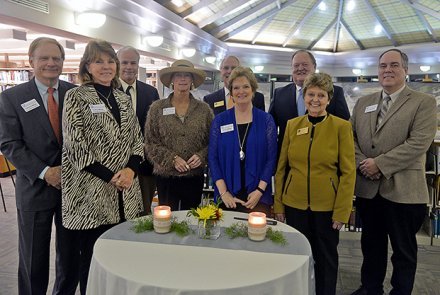 Benefactors and community leaders joined together at Piedmont Technical College recently to celebrate and toast the successes of the past year with the annual benefactors’ event.

Dr. Ray Brooks, president of PTC, welcomed those in attendance. The event was to honor Cornerstone Society members and benefactors who had contributed to the growth and success of the college. This year’s event was a special tribute to the members who had passed in the past year - Calhoun and Ella Claire Mays and Dr. Lex Walters.

Fran Wiley, assistant vice president for development, introduced the honorees and shared a brief history of their support of Piedmont Technical College and their membership into the Cornerstone Society.

The first toast of the evening was presented by Gus Burgdorf, development associate with the PTC Foundation. Burgdorf toasted Calhoun and Ella Claire Mays, whom he had known for more than 40 years.

“Calhoun was a visionary. He could see the need and appreciate what Piedmont Technical College does as it relates to the overall economic development of this area,” Burgdorf said. “Ella Claire was a wonderful wife and mother. She was a generous person who touched the lives of everyone she knew.”

The second toast was given by Chuck Fox, longtime friend of Dr. Lex Walters.

“His impact on me and this community and this state and everyone who has passed through these halls was significant,” Fox said. “His fingers extended out to the remote areas with an education system that has constantly improved.”

Photo Caption: In recognition of their support of Piedmont Technical College, members of the Cornerstone Society were recognized at the recent event. This year’s event was a special tribute to the members who had passed in the past year - Calhoun and Ella Claire Mays and Dr. Lex Walters. Pictured are, from left, Calhoun Mays III, Cathy Mays, John Lund and Anne Mays Clinkscales, members of the Mays family; Thomas Herlong, PTC Foundation Board treasurer; Fran Wiley, assistant vice president for development with the PTC Foundation; Dr. Ray Brooks, president of Piedmont Tech; Rosemary Walters and Dan Walters, members of the Walters family.