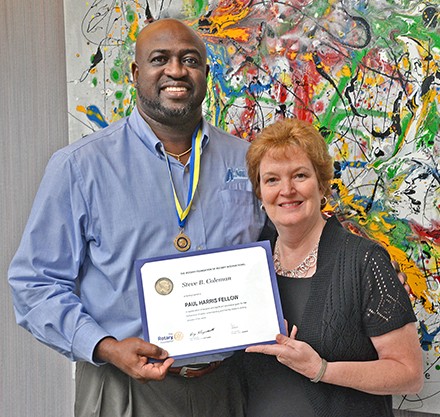 Steve Coleman, director of Project Genesis at Piedmont Technical College, has been recognized as a Paul Harris Fellow by the Emerald City Rotary Club.

“I’m appreciative for this award because it is your peers recognizing you,” said Coleman. “It was given to me based on me simply doing what I felt was right and what is necessary for the community.”

Named for the founder of Rotary International, a Paul Harris Fellow recognizes an individual who contributes a set amount to The Rotary Foundation or has that amount contributed in his or her name through either a monetary donation or a point system. Coleman was given this recognition due in part to a contribution from Lorraine Angelino, Assistant Regional Rotary Foundation Coordinator (ARRFC).

“When Steve came and spoke on the Genesis Program and the work he was doing, I felt that he was doing an excellent job helping out with a community issue,” said Angelino.

The Project Genesis initiative focuses on recruiting, retaining and graduating African American male students in the associate in arts, criminal justice, computer technology, industrial electronics technology and heating, ventilation and air conditioning technology programs. These programs were chosen because of demand in the job market, and good earning potential.

Coleman said there is clear evidence that increased educational attainment after high school leads to higher lifetime earning potential, and to lower unemployment. In the U.S., more than two-thirds of African American men who start college do not graduate within six years, which is the lowest college completion rate among both sexes and all racial/ethnic groups in higher education, he said.

“Too many of our African American men are struggling, so our goal is to work with our target population to make sure 100 percent of them graduate and continue on to pursue a bachelor’s degree or a rewarding career,” said Coleman. “Our challenge is to instill that desire to graduate into these men. Our passion is useless if they don’t want to do it for themselves.”

Photo Caption: Steve Coleman, left, director of Project Genesis at Piedmont Technical College, has been recognized as a Paul Harris Fellow by the Emerald City Rotary Club for his work in the community with the project. Representing the Emerald City Rotary Club is Fran Wiley, assistant vice president for development. The project, funded through a PBI grant, focuses on assisting African American male students complete their associate degree.