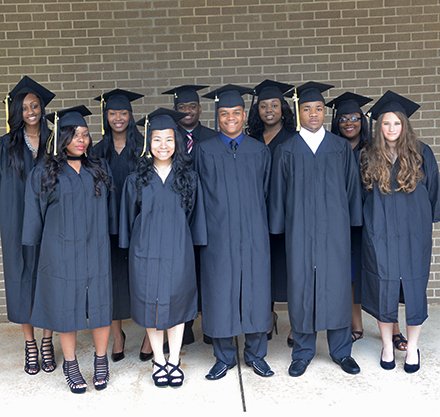 The following was adapted from a story by Ariel Gilreath that originally ran in The Index Journal.

Nineteen high school students from across the Lakelands graduated with associate degrees at the commencement.

The students from each county with the highest GPA were also all middle college students.

For McCormick High School, a quarter of the students in the senior class graduated from tech in the middle college program and all of them were accepted into four-year schools.

Valerie Yarbough-Jones, director of the middle college program at the high school, said the 10 students graduating received a total of more than $1 million in scholarships.

“We’re very proud of them as a district,” Jones said. “I’m very happy and proud to work with them.”

Robin Harris, is a 17-year-old McCormick High senior who received an Associate in Arts Thursday, said she planned on attending the University of South Carolina-Aiken in the fall as a nursing major.

The middle college program helped her not only get two years ahead after high school, but it also reduced the amount she would have had to take out on student loans.

“My family isn’t the richest, so with McCormick County paying for it, that was really good,” Harris said. “And then I got a lot of experience with college, so it wouldn’t be a shock when I went off to a four-year university.”

Harris knew she would attend college, but without the middle college program, there would have been more obstacles for her.

“I’m sure I would have found a way, but it would have been a lot more difficult I believe, just leaving high school, because I think high school babies you a lot more than college,” Harris said.

Ginger Cannon is not only a middle college student from Ninety Six High School who graduated from Piedmont Tech, but she was also one of the commencement speakers.

Cannon spoke about how she looked up to her sister, who graduated from the middle college program with Emerald High School years earlier.

She will attend Pensacola Christian College in the fall for pre-medicine.

She is the only student from the high school graduating in the program this year.

Photo caption: Ten students from the Middle College at McCormick were part of the recent spring graduation ceremony. They represent 30 percent of the McCormick High School 2017 graduating class.