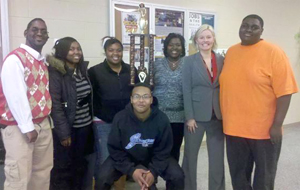 High school students from Laurens, Clinton and Newberry will be representing Piedmont Technical College at the annual regional Scholars’ Bowl in Atlanta April 16 after taking the state championship recently at Horry-Georgetown Technical College. The students are part of the Upward Bound LENS program, which serves Laurens, Edgefield, Newberry and Saluda counties.

The Scholars’ Bowl began in 1988 among the 17 state Upward Bound programs. Students compete in a variety of areas from science and math to history, literature and current events. The competition is held in conjunction with the Student Leadership Conference sponsored by the South Carolina Council of Educational Opportunity Programs Personnel held annually at HGTC. The win for the Piedmont Tech students was the first state championship for the college’s program.

“Most of our students are very scholastic, maintaining A’s and B’s,” said Rico Saxon, administrative specialist with the Upward Bound LENS program who works with the students on the team. “They all have very high GPAs and are very smart students.”

The students on the team come from Clinton High School, Laurens District 55 High School and Newberry High School. There are no specific requirements for participation other than being involved with the Upward Bound program, but the students who are selected usually have one or two areas where they excel.

“We try to find students who have a specialty,” said Jim Oree, director of the Upward Bound program at Piedmont Tech. “The beauty of this team is that they have been together for three years, so they know each other’s strengths and weaknesses.”

The Upward Bound program is a federal program that geared toward first-generation low-income students who have an academic need, but also demonstrated academic potential. The program started nationally in 1965, and came to Piedmont Tech in 1992. Oree says the goal of the program is to help students achieve their academic potential and then go on to earn a four-year degree.

“It’s a focused program where the kids can’t hide. In a large classroom at Laurens High, you get a class with 25, 30 kids, you can just sit in the back of the room, don’t say anything, get your little C and go on about your business,” Oree said. “You can’t do that when the teacher is talking to you and you alone.”

The students in the program have to commit to Saturday classes during the school year and a six-week program during the summer. While the program is a huge commitment for the students, the success rate for Upward Bound program students entering college is more than 94 percent.

“The summer is the most time we have to work with the students to make changes in behavior and study habits,” said Oree. “But, we also take them anywhere you can imagine. We tour colleges and businesses. We want to expose them to careers that require a bachelor’s degree so they can find something they like to do.”