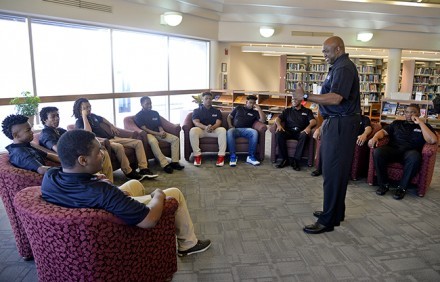 Through a new program at Piedmont Technical College called MODELS Academy, the college is taking action to address a problem of national proportions.

“There continues to be a crisis among African American males in education,” said Steve Coleman, director of Genesis Initiatives.

In the U.S., more than two-thirds of African American men who start college do not graduate within six years, which is the lowest college completion rate among both sexes and all racial/ethnic groups in higher education.

Based on the previous success of the Project Genesis initiative at Piedmont Technical College, the idea for MODELS Academy was born.

“Our work with Project Genesis proved to be very successful with a large group of African American men on campus at PTC,” Coleman said. “I saw how that consistent interaction made a difference in their academic lives, their social lives and their existence here at our college. I thought that work would translate to a community initiative focused on early intervention and mentoring.”

MODELS (Men Of Distinction, Elite Leaders and community Servants) Academy was based on several organizations around the country including Call Me MISTER, and 100 Black Men.

“The MODELS Academy program is something that was established right here in Greenwood County,” said Coleman. “As an African-American male who has been blessed with success, it is my duty to be active in the African-American community and to help address some of the issues.”

The program is targeted to young men in grades 8-12 who have already exhibited potential. Currently, 53 students are participating in the program from Abbeville, Greenwood and Newberry counties. Students are recommended by guidance counselors or community members. Coleman said the students they want to help are those who have already proven potential that often fall through the cracks.

“We want to give this opportunity to a young man who maybe can’t make one out of 1000 jump shots, but he’s doing well academically and socially,” said Coleman. “He’s got the potential to make a difference and he should be as exalted in the community as the guy who scores 30 points a night.”

The students in the program meet weekly with a planned curriculum that covers social and academic concerns. They are required to read, study African-American history, participate in debates to hone their critical thinking and oratory skills and discuss current events. The students are also required to participate in community service projects. Most of the goals of the program are based on The 5 Wells of Leadership from Morehouse College.

“The tenets of the five wells are they want them to be well-read, well-traveled, well-spoken, well-dressed and well-balanced,” said Coleman. “Those are the principles we employ to try to mold well-rounded young men.”

Coleman says his ultimate goal is to prepare these young men by showing them all of the opportunities that are available to them with an emphasis on the educational possibilities.

MODELS Academy joins a robust set of support programs at Piedmont Technical College for students from a diverse set of backgrounds. Other special populations served include veterans, first generation college students, and adults returning to the workforce or changing careers, among other groups.

“Piedmont Technical College serves an extremely diverse range of students, and we’re committed to providing people from all walks of life the tools they need to enjoy the benefits a college education can provide.” said Dr. Ray Brooks, president of PTC. “We think MODELS Academy is going to make a huge difference for these young men, and we look forward to seeing them succeed.”

Photo Caption: Steve Coleman, right, director of Genesis Initiatives, addresses students in the MODELS Academy. The program is targeted to young men in grades 8-12 who have already exhibited potential in order to prepare them for the future and encourage them continue their education.