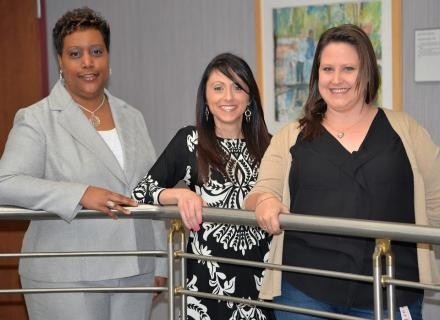 Three Piedmont Technical College employees have been named Outstanding Educators for the 2014 – 2015 academic year and were honored at a recent South Carolina Technical Education Association conference.

Wright began teaching at Piedmont Tech five years ago after spending time working as a teaching assistant in the chemistry department at Furman University. She found that she enjoyed the difference she was making in the lives of the students.

Wright continues to work to improve the learning opportunities for her students. She helped secure a partnership with the Community College Undergraduate Research Initiative (CCURI) which enabled her to receive funding for designing and implementing four innovative courses and an undergraduate research project with her students. She received a grant from the American Chemical Society to develop a chapter at the college. And she aided in bridging the gap between students and the workplace through the development of internships at local companies who monitor water quality. Wright said she believes these opportunities give students a more competitive advantage when applying for jobs or going on to further their education.

Lanouette is actively involved in all aspects of the college. She serves as chair of the college’s United Way Campaign, participates in the Annual Adjunct Expo and supports the Student Affairs division at graduation ceremonies and student/faculty recognition ceremonies.

Elmore first came to PTC in 1998 as a student rather than a staff member. She graduated from Lander University in 1990 and spent four years at Self Regional. In 1994, she moved on to GLEAMNS as a case worker, then as the center coordinator. While at GLEAMNS, Elmore enrolled in the Early Childhood Development program at PTC and graduated in 1999. But, she decided that she was ready to move on from younger children to older students.

Elmore joined the TRIO program at Piedmont Tech in 2004 and moved into the position of nursing support counselor in 2007. In 2013 Elmore was named director of the McCormick County Campus and in 2014 she added the responsibility of director of the Abbeville County Campus. She said that she enjoys working with the variety of students who attend classes at the county campuses.