Campus Director Beth Jaeger led the initiative to add the amenity in a project that was unforeseeably delayed for nearly two years. 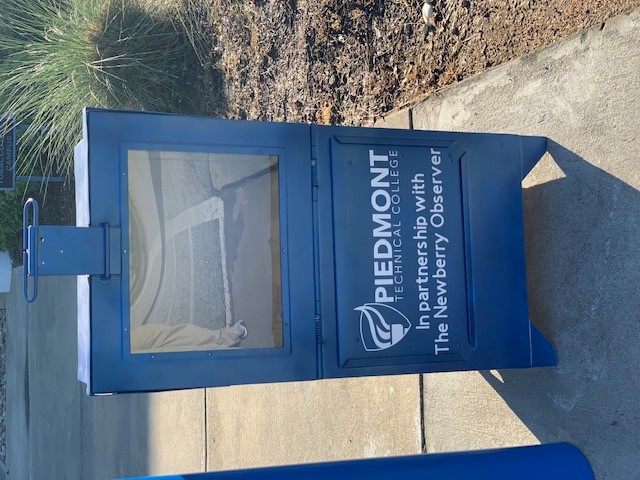 “I had been wanting to have a Little Free Library here for years,” she said. “The project has taken a little longer than anticipated, and when we were out with COVID, it also pushed things back.”

Jaeger is reluctant to take credit and maintains that it took a team of committed individuals — and a partnership with The Newberry Observer (NBO) — to truly make the LFL a reality.

“It turned into a campus-wide goal,” she explained. “And when we were looking for ideas for how to house the little library, someone suggested perhaps using an old newspaper vending box.” So they contacted the newspaper to make an inquiry, and the NBO responded with the donation of two used paper boxes.

Jaeger’s husband, a welder, performed some upfitting on one of the boxes, which then was sanded and painted. Local artist Robert Matheson created the sasquatch on the side to add interest. Many hands went into the project. Jaeger and her crew will contemplate the idea of upfitting the second box for a second LFL location to be determined.

When asked why she went to the trouble of applying for an official LFL charter from the national non-profit organization, Jaeger said, “I wanted it to be official. And it adds us to their map of LFL locations. People can do a Google search for the LFLs nearest them, and our box will pop up.”

The LFL concept — take a book, leave a book, or do both — was introduced in 2009 by Todd H. Bol of Hudson, WI, who built a small-scale schoolhouse replica, filled it with books, and placed it on his front lawn to honor his mother, a schoolteacher who loved to read. He and others ultimately formed a nonprofit organization with more than 100,000 locations in all 50 states and 85-plus countries, all sharing a mission to increase access to books. In fact, the charters are numbered in the order they are created. The lower the charter number, the longer that library has existed. Accordingly, Newberry’s latest LFL is the 119,919th LFL worldwide.

Jaeger says she has received book donations from faculty and staff and has a good supply for now. She will keep the LFL stocked with a variety of literature suitable for all ages. It is important, she said, to maintain it for the entire community. She was excited to see activity around the LFL already.

“I love this idea personally. Reading is one of those things that, as an institution of higher education, I think we should promote,” she said. “I want to help place books in the hands of people who want them.”