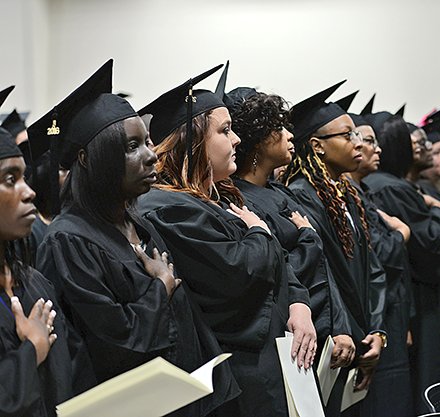 Commencement exercises will begin at 3 p.m. for Associate of Arts and Science, health science and nursing graduates. A ceremony will be held at 7 p.m. for industrial & engineering technologies, business and computer technology and public service graduates. Both commencement exercises will be held in the James Medford Family Event Center at Piedmont Technical College in Greenwood.

In recognition of their excellence and the stories they have told about their journeys in higher education, five graduating students will be speaking at the commencement ceremony - three in the afternoon and two in the evening.

Michelle Burns has made her life about helping people as a pastor’s wife and stay-at-home mom. But she wanted to expand that role by following a life-long dream – becoming a nurse. The Newberry resident will be receiving her Associate in Applied Science Degree with a major in Nursing. She hopes to pursue a career working in either surgery or labor and delivery.

Ginger Cannon of Ninety Six wanted a challenge while in high school as she looked to prepare for her future. She found it with the Middle College at Ninety Six High School. She will be receiving her Associate in Arts Degree a full month before she earns her high school diploma. Cannon plans to attend Pensacola Christian College in the fall where she will be studying pre-med.

Reginald Q. Rucker spent many years working behind the scenes for some of the biggest events in the world, including Super Bowl XXIII. That experience showed him not only the glamour, but the heartaches. The Greenwood native made the choice to leave it all and focus on helping people. He will be receiving his Associate in Applied Science Degree with a major in Human Services. He plans to pursue a bachelor’s degree from Columbia College and then a master’s degree with the goal of becoming a substance abuse counselor.

Samantha Hollingsworth has always had a dream to open her own business. The Greenwood native had plans to jump into the business world right out of high school, but her parents convinced her that a college degree would give her an advantage. She will be receiving her Associate in Applied Science Degree with a major in Business Administration with an Accounting concentration. She plans to open a clothing boutique in the near future.

Kenneth McDaniel of Whitmire never thought he would return to school after graduating from high school 35 years ago. But, after being laid off for the second time in seven years, he knew he needed to do something different. So, he enrolled at Piedmont Tech. He will be receiving his Associate in Applied Science Degree with a major in Building Construction Technology. He plans to enter the workforce with a focus on helping people.

A special feature of commencement exercises will be recognition of top graduates from Abbeville, Greenwood, Laurens, McCormick, Newberry and Saluda counties.