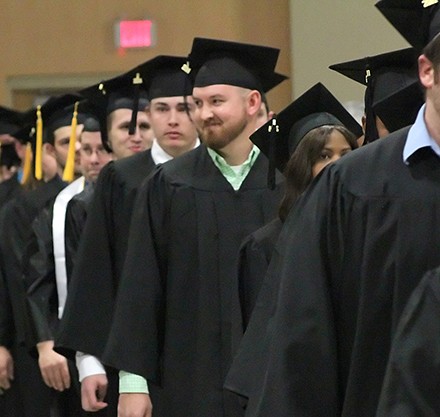 Commencement exercises will begin at 3 p.m. for agriculture, industrial & engineering technologies, business and computer technology and public service graduates. A ceremony will be held at 7 p.m. for Associate of Arts and Science, health science and nursing graduates. Both commencement exercises will be held in the James Medford Family Event Center at Piedmont Technical College in Greenwood.

In recognition of their excellence and the stories they have told about their journeys in higher education, five graduating students will be speaking at the commencement ceremony - two in the afternoon and three in the evening.

Malaurie Hullings of Plum Branch has never been the type to follow the crowd, a trait that led her into the engineering technology program. She will be receiving her Associate in Applied Science Degree with a major in Engineering Graphics Technology in the afternoon and her Associate in Arts in the evening. She plans to continue her education by pursuing a bachelor’s degree and eventually a master’s degree.

Hodges resident Kenneth Washington had reached an impasse at his former job and knew he needed to pursue something else. He loved solving puzzles and doing things that were creative, so he researched programs at Piedmont Technical College. He will be receiving his Associate in Applied Science Degree with a major in Mechatronics. He plans to enter the field, and would like to pursue a bachelor's degree to become an educator.

Megan Strutko of Greenwood has always planned to go into optometry and she wanted to get her start at Piedmont Technical College. She will be receiving her Associate in Arts as one of the first graduates of the Honors Program at Piedmont Technical College. She plans to continue her education by pursuing a bachelor’s degree at the University of South Carolina before moving on to medical school.

After completing 20 years in the United States Navy, Juanita Gilchrist of Greenwood wanted to continue a legacy started by her mother and sister - a legacy of helping people. She will be receiving her Associate in Applied Science Degree with a major in Human Services. She plans to return in the fall to pursue her bachelor's degree with Columbia College with plans to work with veterans with PTSD.

John Calhoun of Silverstreet spent many years working in the business side of the pharmaceutical industry, but decided he wanted to be more hands on with helping people. He will be receiving his Associate in Applied Science Degree with a major in Nursing. He plans to pursue a career in critical care nursing while continuing his education.

A special feature of commencement exercises will be recognition of top graduates from Abbeville, Greenwood, Laurens, McCormick, Newberry and Saluda counties.