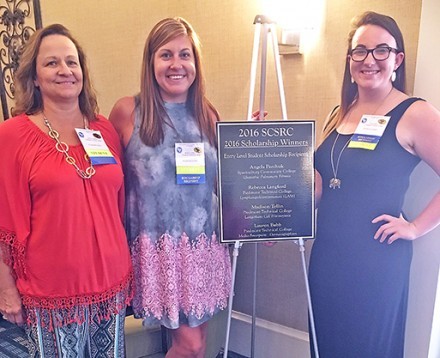 Lauren Babb of Bennettsville, Beckey Langford of Johnston and Madison Tellin of Ninety Six each received one of four $400 scholarships presented to students. The awards were based on either an original essay or a media presentation prepared by the applicant with subject matter that demonstrated clear relevance to the practice of respiratory care or the profession.

The students’ entries were originally part of their RES 111 curriculum on Pathophysiology and the study of the diseases associated with respiratory care. The students chose a variety of disorders to research. Langford researched Lymphangioleiomyomatosis (LAM), a rare lung disease that tends to affect women of childbearing age; Tellin chose the topic of Langerhans Cell Histiocytosis, a rare disease involving clonal proliferation of Langerhans cells, abnormal cells deriving from bone marrow and capable of migrating from skin to lymph nodes; and Babb used her personal experience to present a PowerPoint presentation on Dermatographism, a skin disorder characterized by the abrupt onset of welts and hives where the skin is exposed to pressure, scratching, itching or stroking.

“I’m very proud of our students and the success they had,” said Ann Allen, respiratory care program director. “The scholarship committee is made up of respiratory therapists from across the state, not just educators, so these students are making an impression on the professionals who will eventually be their peers.”

Four scholarships were presented at the conference among the eight technical colleges who have a respiratory care program. The fourth scholarship was presented to a student from Spartanburg Community College.

“I think it is impressive that of the four scholarships that were awarded, three came back to Piedmont Tech,” said Dr. Jerry Alewine, dean of health science. “I think the success of our students speaks volumes to the quality of our respiratory care program.”