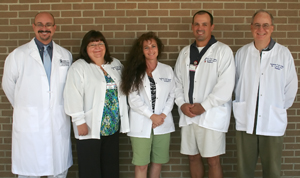 Lee Johnson of Greenwood and Maryanne Thompson of Newberry both received scholarships, two of the four that were offered to respiratory care students across the state. Four honorable mentions were named that included Dianne Scott of Ninety Six and John Staed of Anderson.

SCSRC presents four $400 scholarships each year to current students or recent graduates as a means of promoting student involvement. The scholarships were presented based on a research paper submitted on any respiratory care topic that involved a procedure, expanding the body of knowledge or some new innovation in the respiratory care field.

“The papers submitted by our students were on topics we would not study in class,” said Jerry Alewine, dean of health science and a respiratory care instructor. “Because of what they did in researching the paper, they have expanded their own knowledge base.”

Thompson’s paper, which was chosen as the top entry for the state, was “Sandstorms: The Silent Enemy for Our American Troops” based on her experiences serving in Kuwait. Johnson’s paper dealt with “Effect of Diesel Fumes on Respiratory Tract.” Staed submitted “Recognizing Early COPD” and Scott wrote on “Hyperbaric in Today’s Medicine.”

“I wrote this paper because it touched home with me,” said Thompson. “When I started researching it, I realized this has to be talked about. I hope to work in a VA hospital and I wanted to be an advocate for those vets at the VA hospital.”

“Having two of the four scholarships coming back to the college is absolutely a validation for the educational background our students are receiving,” said Alewine. “I think it says a lot for not only what we offer as a respiratory program or a health science division, it gives credence back to their English instructors.”