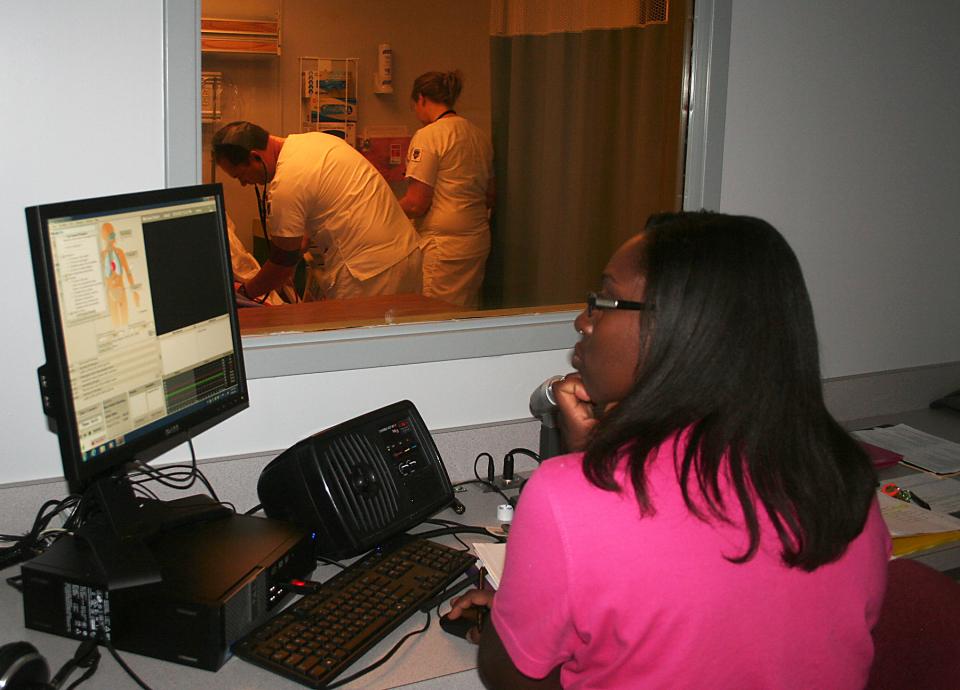 The simulation lab for Piedmont Technical College’s nursing program has been given an upgrade that moves it to the forefront of nursing education.

The Sims lab has long been an integral part of the nursing program, allowing students to practice skills in a safe environment and exposing them to scenarios that may not present themselves during clinicals in a hospital environment. But, as she attended conferences and visited other colleges and universities, Elizabeth Wilson, Sims coordinator, observed other methods and systems that could improve the existing lab.

“I attended a workshop in Charleston at MUSC and saw how their lab was set up,” she said. “It gave me some ideas about ways we could improve efficiency and learning outcomes here.”

The new simulation lab consists of a control room sandwiched between two manikins’ rooms. The control room allows the instructors to control the manikins’ vital signs, breath sounds, voice and other aspects as the students provide nursing care. A one-way glass on both sides of the room allows nursing faculty to observe students as they participate in the simulation without the students seeing and being distracted by their presence.

“The students are nervous already because they know they are being watched,” said Wilson. “This set up does cut down on some of that discomfort and puts them more at ease.”

With the help of Sound Systems and More, the control room has also been equipped with a two-way speaker system where the instructor at the controls can communicate back-and-forth to the students and/or role play certain medical situations. Cameras have been mounted on the ceiling above each manikin giving instructors the option to record scenarios and also transmit data to the control room monitor screen. Recordings are then viewed later during the debriefing stages of the class when instructors and students can critique the exercise.

“This new setup is more like being in a hospital environment,” said Chad Vickery, a senior nursing student from Donalds. “It takes the pressure off without the instructors and classmates seeing everything you do and it helps you feel like you are more prepared.”

The simulations and the labs are in a constant state of improvement as the faculty search for ways to better prepare students. The OB lab has seen moderate changes as the manikins have been updated to include some of the most state-of-the-art models. The improvements and upgrades have made Piedmont Tech’s nursing lab as technologically advanced as many other colleges and universities across the state.

“We are on the cutting edge of technology with our labs,” said Tara Harris, dean of nursing. “Just having three separate simulation rooms is astonishing. With the simulation labs, nursing and critical thinking skills have improved and student learning is enhanced.”

For more information on the nursing program, contact Morgan Chalmers, health sciences counselor, at (864) 941-8733 or go to www.ptc.edu/nursing.