Like proud Olympic champions, a group of Greenwood kindergartners bowed their heads to receive a special medallion placed around their necks on a sunny fall day in a Greenwood High School athletic field. The Promise Day Celebration in 2016 officially introduced the Greenwood Promise to the community and reinforced the medallion’s inscribed message that “You can go to college. We promise.” 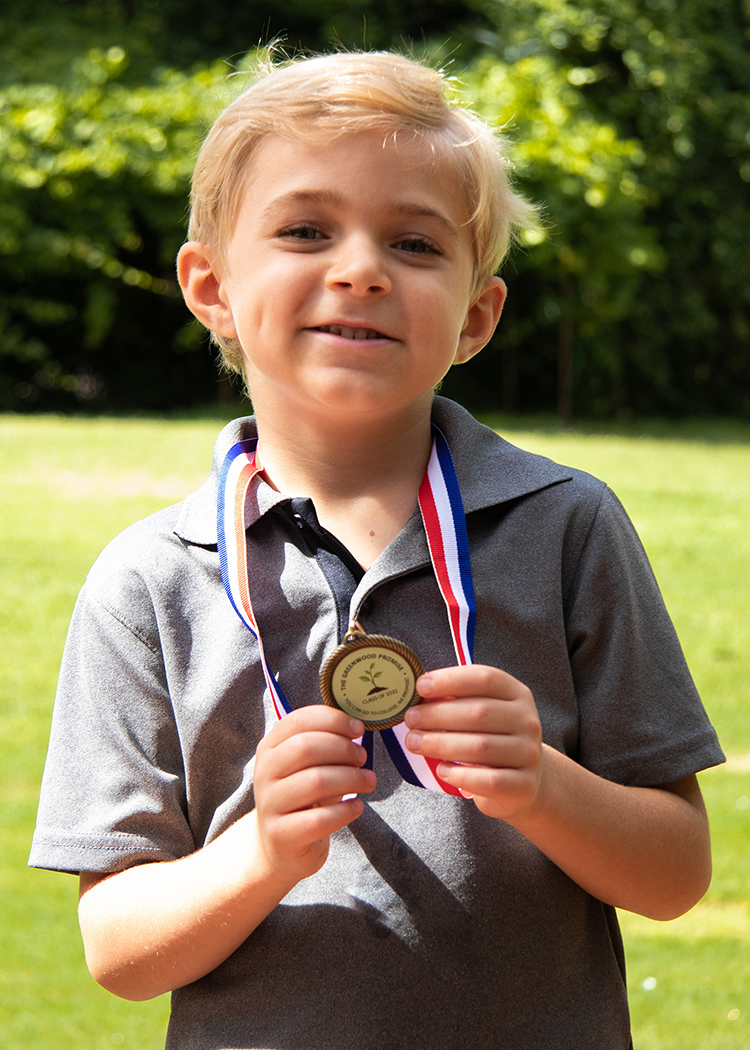 “We decided, in fact, to present all kindergarten kids in the county with the medallion that first year at various school events with parents and grandparents in attendance,” said Ron Millender, one of the core group of community and business leaders that conceived of the Greenwood Promise and now serves as its Board Chairman. “We wanted the families to understand that their kids really could go to college. It’s not an impossible dream. We are working to change that narrative.”

Establishing a clear, affordable path to college certainly increased the likelihood of graduating seniors from high school enrolling in college. Millender noted that, before 2017, Greenwood County consistently lagged 8% to 10% behind the state average in high school graduates enrolling in college, according to statewide data. “For the class of 2019, we were 5% above the state average!”

Between 2016 and 2017, Greenwood County high school graduates enrollment at PTC increased 38%, and the number of graduates increased 133% (more than double from the previous cohort). Greenwood Promise data showed a 58% increase in the number of full-time students enrolled at PTC over the program’s first three years.

Launched with the high school graduating class of 2017, the Greenwood Promise’s partnership with Piedmont Technical College (PTC) is the result of many years of discussion, research and planning that took place long before the first Greenwood County high school Promise graduate was enrolled at PTC.

When the Greenwood Partnership Alliance (GPA) was developing its strategic plan in 2010, it learned of a program in Michigan called the Kalamazoo Promise that might be good to replicate locally some day. Mark Warner, then CEO of GPA, began researching the Kalamazoo Promise and gave a presentation of his findings for GPA leaders in 2012. That’s when Millender, who had recently retired from Capsugel, was enlisted to carry that research forward into a conceivable plan. The situation was compelling.

“We recognized the need for a more well-trained workforce,” he said. “We needed to send more kids through Piedmont Tech if they were going to enable economic growth in Greenwood County. … I researched about 50 different promise programs across the U.S.”

After presentations to the Self Family Foundation and a subsequent feasibility study in 2014, Greenwood Promise LLC was formed under The Foundation for a Greater Greenwood County on July 23, 2015. Greenwood Promise later successfully applied for 501c3 status and, in 2019, became a stand-alone, non-profit entity.

The decision was made to start a funding campaign, and Jim Pfeiffer, president and CEO of Self Regional Healthcare, agreed to be the fundraising campaign chairman.

“We made the decision that we wanted to run this program in perpetuity,” Millender said. “We wanted to make a promise to kindergartners that we could keep.” That required endowment-based funding and a goal of $5 million in donations from the community. “The first $3 million was achieved early. One donor, a private citizen, said they would give $1 million. For the first time in my life, I was totally speechless. They wanted to remain anonymous.”

“There are lots of first-generation students. The process to get them enrolled is not always that easy,” Davenport said. “Often, they just don’t know what to do.”

“Katie did more than 500 one-on-one meetings with kids and their parents to go through the process. One of the more difficult steps is filling out the FAFSA form,” Millender said. “It’s not easy for someone who hasn’t done those kinds of forms before. They give up. That is the kind of stuff you have to go the extra mile for.”

Because the missions of the Greenwood Promise and PTC are so well-aligned, the partnership established years ago with Piedmont Technical College continues to grow and thrive.

“We are proud to be aligned with The Greenwood Promise in ensuring that more high school students discover how accessible college can be,” said Dr. Hope E. Rivers, president of PTC. “PTC has welcomed hundreds of students through the program since it started, and the program is helping to reinforce the point that a college education is possible—for everyone. We look forward to our continued partnership with Greenwood Promise.”

“This program wouldn’t exist if not for our partnership with Piedmont Technical College,” Davenport said. “Together, we are making the promise of a college education possible.”

For more information about the Greenwood Promise, go to www.greenwoodpromise.com or www.ptc.edu/promise.