The 18th-century frontiersman Daniel Boone likely maintained his own muskets and flintlock pistols because, well, there weren’t a lot of gunsmith shops in the open wilderness. Anyone over 50 probably remembers the popular television show “Daniel Boone,” which aired in the mid-1960s. Piedmont Technical College (PTC) Gunsmithing Program Director Jerry Capone does. 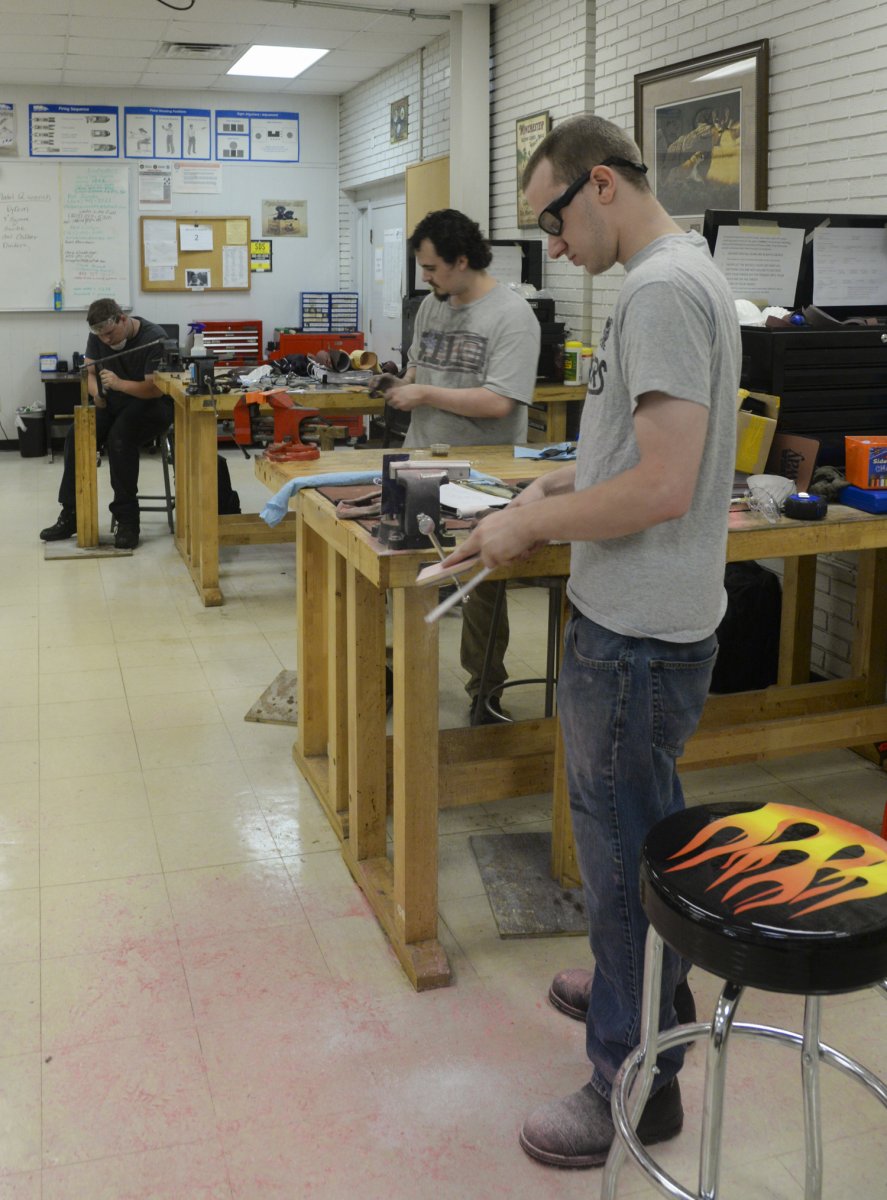 “I grew up in the time when Fess Parker played Daniel Boone on TV,” he said. The whole frontier marksman aesthetic left an impression. “As a hobby, I started building antique firearms when I was 20. I built my first gun then.”

Fast-forward a couple of decades, and Capone is teaching the trade to students of all ages at PTC. It’s his second career.

“I went to chiropractic school and had a private practice for 25 years,” he explained. Over those years, he continued with his gunsmithing hobby on the side. After he retired, a friend said to him, “You already fix people’s guns for free. Why not do that for a second career.”

Capone took the advice and completed an acclaimed gunsmithing program in Colorado. After that, he opened his own shop in Pickens County. Soon, officials from Clemson University came calling, asking Capone to help teach their elective courses in firearms, safety, and trap-and-skeet. He accepted the challenge. Then, when PTC was looking for someone to head up its gunsmithing program, they recommended he apply for the position. 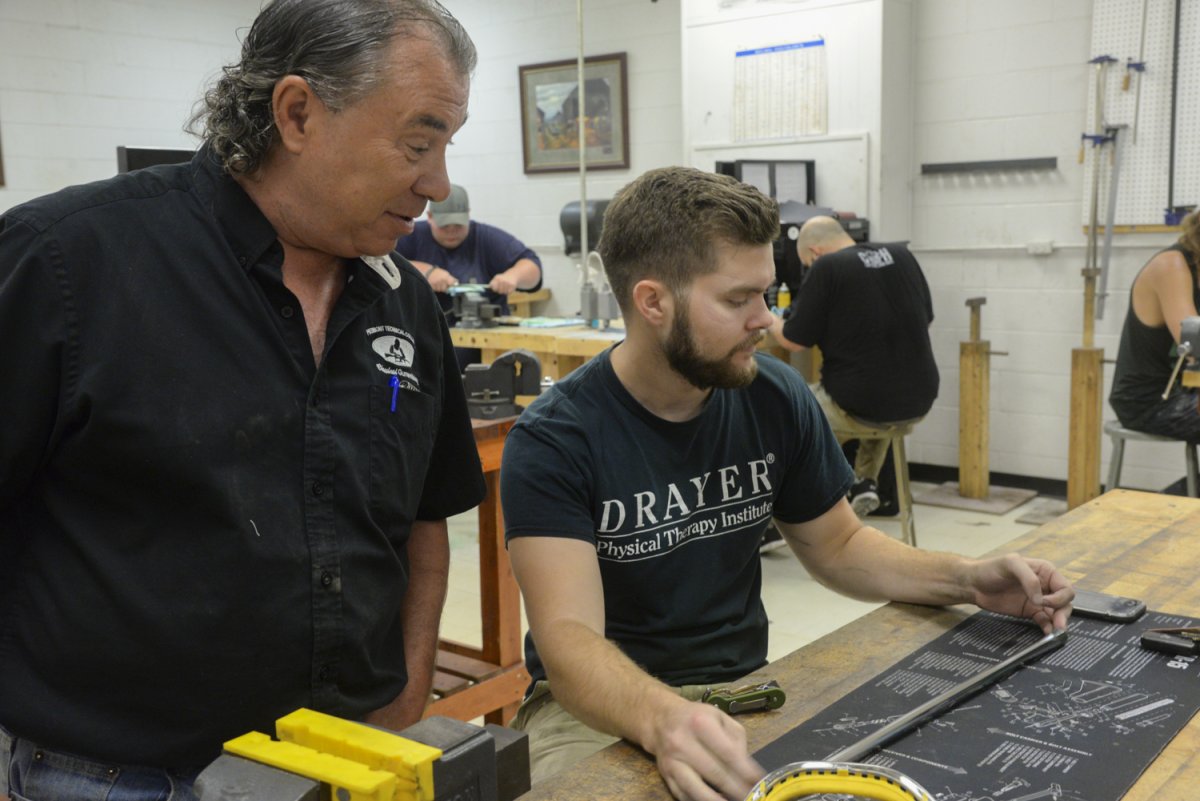 Asked whether it was a challenging transition from chiropractic to gunsmithing, he replied: “Once you learn anatomy and physiology of the human body, a gun is pretty simple.”

Not everyone would agree with that. Students must demonstrate full understanding of something called the “Cycle of Operation,” which is the meticulous series of mechanical steps that must happen between successive shots for any given firearm design.

“The students need to describe and write how every single part works for one round to go off and the next cycle,” Capone said. 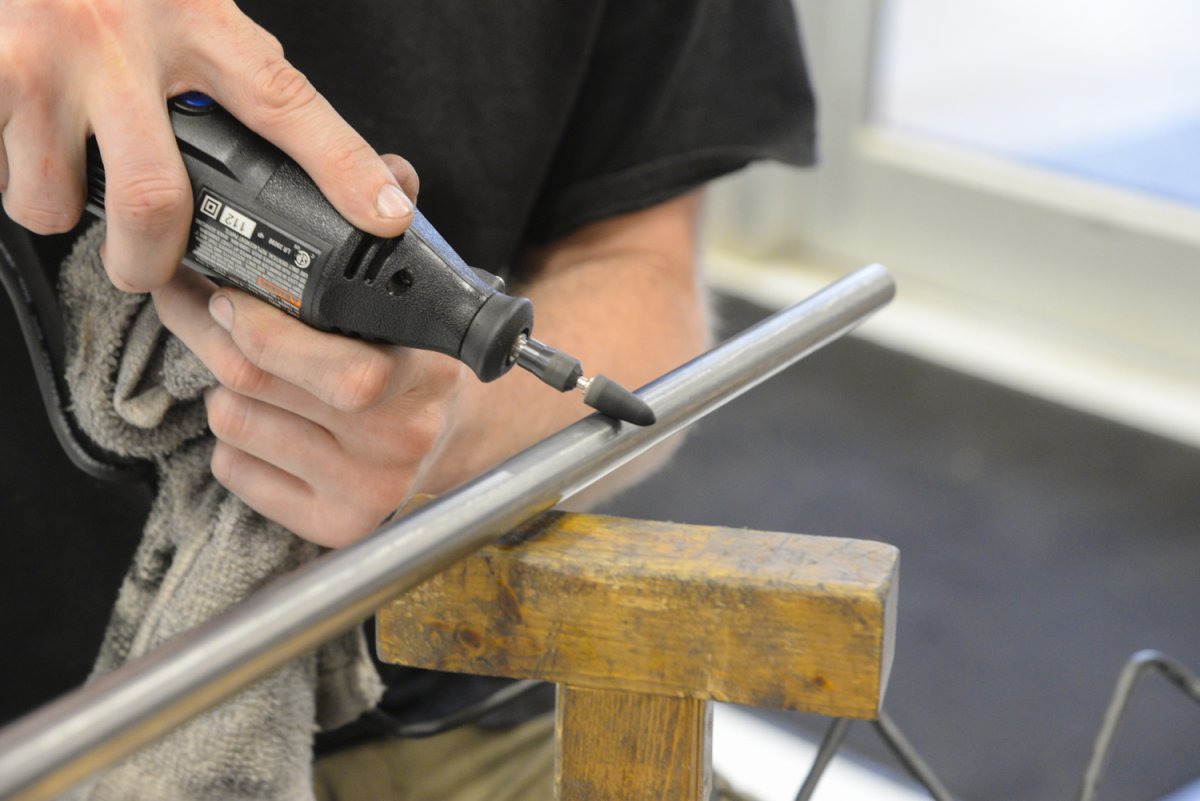 The Gunsmithing Program features a safety test-fire booth in which the muzzle of a firearm can be inserted and fired. Examining the spent case lets the gunsmith know whether the case is correct or not. During the testing, students identify any problems and correct them.

“The first rule of gunsmithing is safety,” Capone said. “Human beings can make mistakes. We teach our students to treat all guns as if they were loaded. You can’t be too safe.”

In fact, the U.S. Bureau of Alcohol, Tobacco, Firearms and Explosives (ATF) is invited in every semester to explain the role of ATF and answer questions about the agency and the most current gun laws.

Daniel Boone aside, younger gunsmithing enthusiasts may have taken their initial inspiration from popular entertainment media and video games such as “Fortnite” and “Call of Duty,” which feature extremely realistic depictions of real firearms. Capone is quick to correct naïve expectations about the trade.

“Most everyone who comes into the program has a love affair with some type of firearm,” he said. “I am here to encourage their dreams but temper everything with reality.” Gunsmithing is physical. It’s labor. It’s hard work. There’s little that’s glamorous about it.

PTC offers the only gunsmithing program in the state and is one of only about five nationwide.

“Most of the students in my program are from out of the area or out of state,” Capone said. “We have even had students from as far away as Alaska and Hawaii.”

The PTC program offers two certificates, Introduction to Gunsmithing and Advanced Gunsmithing. There’s also an associate degree option for those who might want to own their own business or secure employment with a major firearms manufacturer. The first semester covers the basics of traditional gunsmithing. It starts with two weeks of safety training, then lectures, and ends with learning to make tools by hand.

“The second semester is the hardest,” Capone said. “They are in machine shop. Most of our students are fairly good with hand tools, but machine shop tends to be foreign and intimidating. … Everyone works on a project rifle. In the third semester, they are given a blank piece of wood to carve their rifle’s stock.”

Capone says the stocks are typically walnut. The PTC Gunsmithing Program designed a signature widow’s peak embellishment made from African Blackwood. It’s crafted by hand and takes some extra time to complete. 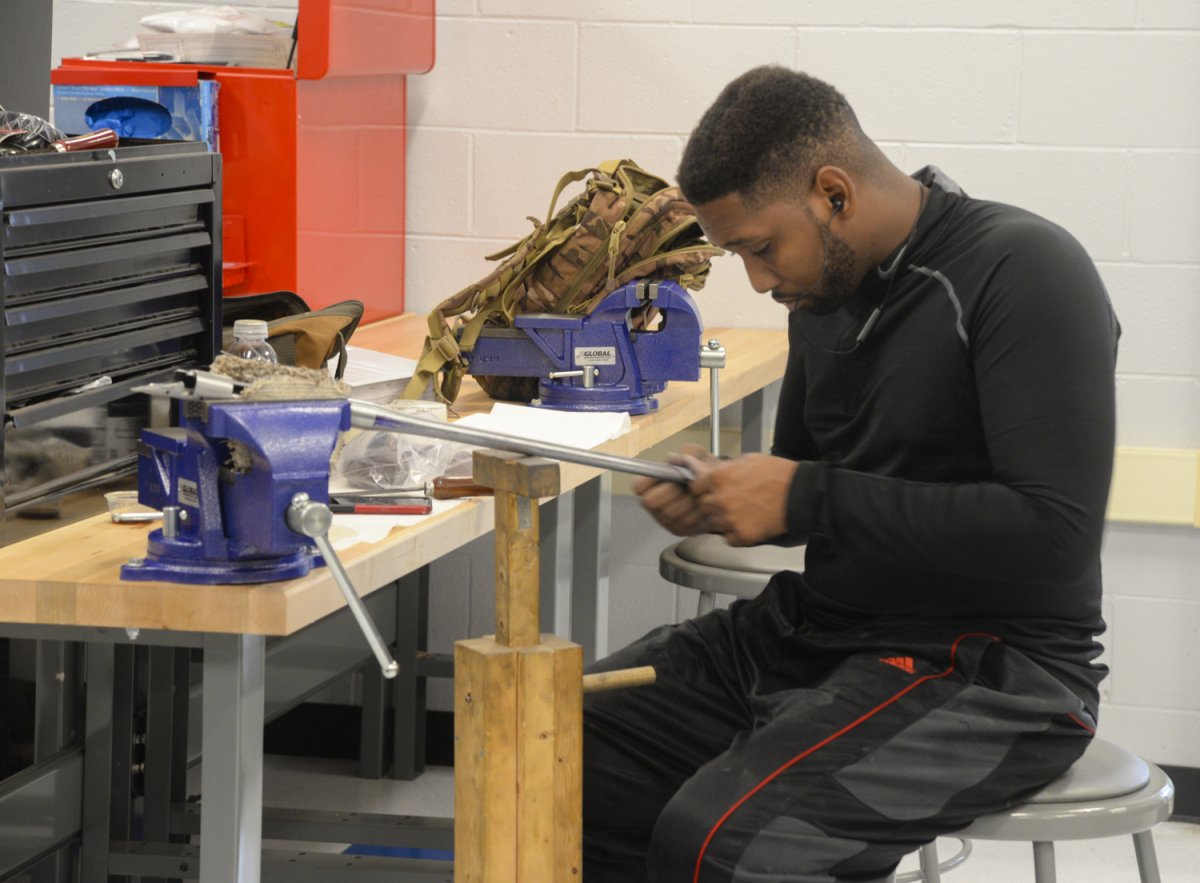 Bill Jacobs is a graduate of the PTC program and now teaches gunsmithing for the college part-time. The Army veteran and retired chemical engineer has owned his own shop ― Bolt & Barrel Gunsmithing LLC ― for 10 years.

“I made my first rifle when I was 14. It has been a hobby since I was a young fellow,” he said. “When I retired from engineering, I had the opportunity to go through the program at Tech. I have tried to retire twice now, and it hasn’t taken. I am still doing ‘gun plumbing.’ That’s how we have described it. We think it’s an apt description.”

Capone says program graduates leave with standard skills to work in a gunsmith shop or for a firearms manufacturer. In fact, he encourages students to consider employment with manufacturing entities. “There are a lot of firearms companies in the South that are looking for a trained workforce,” he said. For gunsmithing shops, repair work constitutes a large portion of their business. “Firearms companies are getting away from making their own repairs.”

Jacobs says that about half of his business falls into the category of repair work. “Then it’s a certain amount of custom-building or building somebody a deer rifle from the ground up,” he said. “Oftentimes, repair is a misnomer. A high percentage of guns that come for repair will just be dirty. Cleaning requires the ability to take the gun apart and put it back together again. Cleaning is important.”

Some students go in another direction, opting instead to work at big box retail stores such as Bass Pro Shops or Dick’s Sporting Goods. One PTC program graduate now heads up the firearms department of a Cabela’s store. “She knows what ammo goes with what gun,” Capone said. “Ammo is not returnable. Once you buy it, it’s yours, but identifying the right ammo can get confusing.”

The PTC Gunsmithing Program curriculum includes a business course, so students can better understand the business side of gunsmithing. That incorporates awareness of the market. Capone says that includes knowledge of demographics, including the fact that women comprise the fastest-growing segment of gun purchasers. 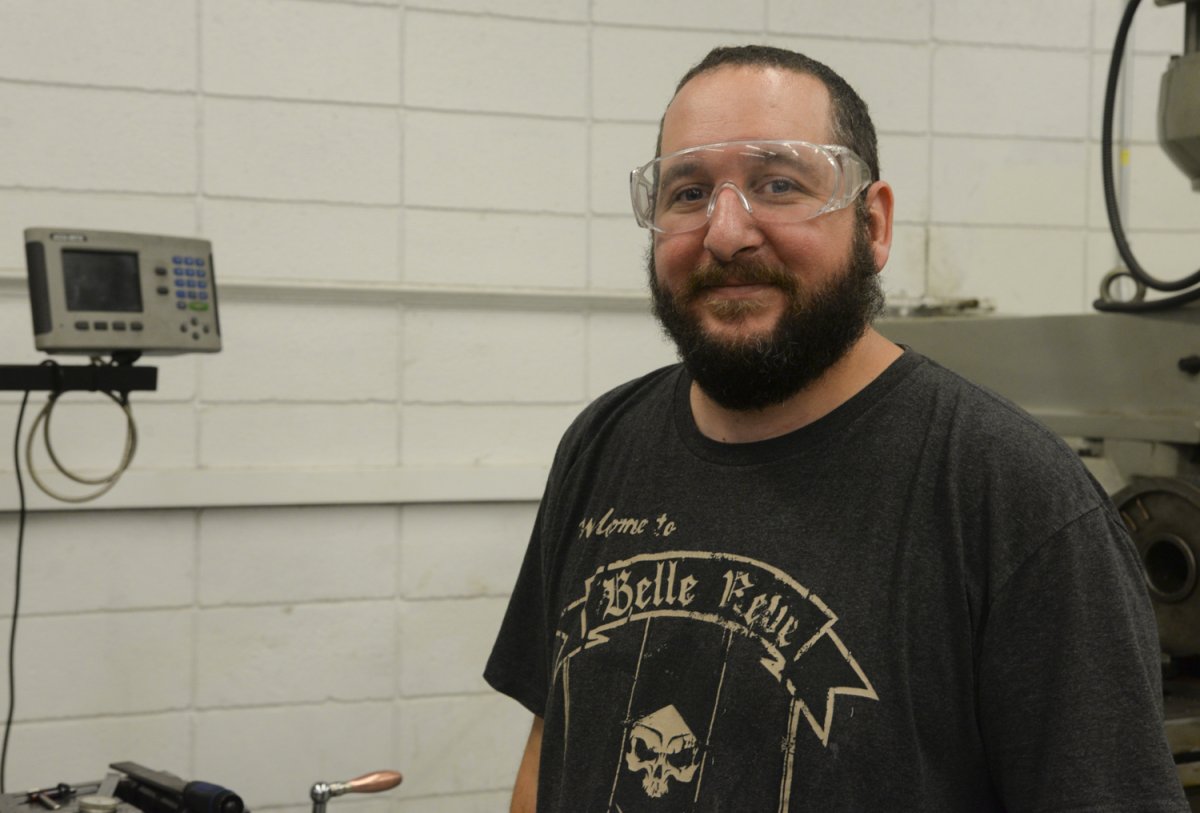 Gregory Winters of Saluda is a Gunsmithing Program graduate who has returned to PTC to work on an associate degree in Machine Tool Technology. He and his wife, Misty, are gun enthusiasts and regularly practice. Both are veterans.

“My wife and I definitely have an advantage of having military training when it comes to safe handling and employment of weapons,” Winters said. “Misty is a good markswoman. With anything, practice makes perfect.”

Winters is continuing his education at PTC to gain an even better understanding of manufacturing and to hone the machining skills he learned in gunsmithing.

“I want to open my own gunsmithing shop and repair weapons,” he explained. “Some firearms are so old and rare that parts are not available. With a degree in machine tool technology, there are not many parts I cannot reproduce.”

Capone says that the gunsmithing projects that pay the most involve the restoration of older firearms.

“People love the guns that once belonged to their grandfather, or maybe the first gun they ever got to shoot with,” he said. “That is where the most money is.”