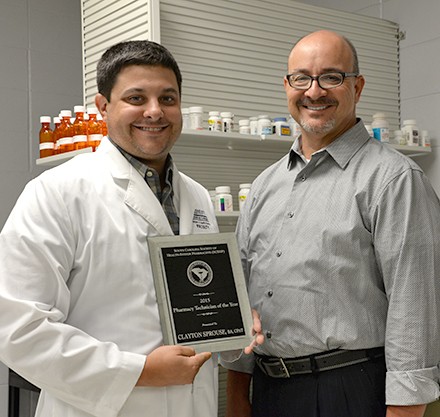 “This is a tremendous honor to be recognized by your peers from across the state,” Sprouse said.

Sprouse was recognized for increasing standards in the pharmacy technology program at Piedmont Tech for preparing IV medications and following USP 797 guidelines. He was also recognized for his political contributions on the behalf of state certified pharmacy technicians on pharmacy legislation during meetings with Senators Harvey Peeler, Floyd Nicholson and Danny Verdin.

Sprouse graduated from Emerald High School and earned his bachelor’s degree from the University of South Carolina. After many years working in retail pharmacy, he came to Piedmont Tech as the pharmacy technology program director in 2011. He also served on the board of directors for SCSHP.

“We are proud of all that Clay has achieved since joining the faculty at Piedmont Tech,” said Dr. Jerry Alewine, dean of health science. “This award is simply a reflection of all the hard work and dedication he puts into preparing our students.”