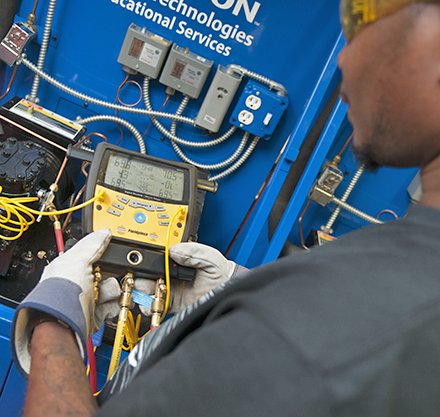 Although the official beginning of summer is June 21, local residents have already had their air conditioners running for several weeks. Piedmont Technical College recently expanded its offerings to make sure everyone can continue to beat the heat.

PTC added a certificate program for HVACR installers. HVACR stands for heating, ventilation, air conditioning and refrigeration. The program, which starts this fall, will prepare students for an entry-level job in the field, according to Bill Cockrell, HVAC program coordinator at Piedmont Tech.

“It’s a two-semester certificate and most of the classes are offered in the day or evening,” Cockrell said. “About 50 percent of the coursework is lecture and about 50 percent is lab work.”

“We have one of the nicest facilities around,” Cockrell said.

Students will take 10 credit hours in the fall and 11 in the spring. Coursework covers topics such as tools needed for the job and how to use them safely, as well as fundamental training in automatic controls, refrigeration, electrical, and sheet metal.

The certificate holders will be a boon for local HVAC firms, according to Cockrell.

“There’s a shortage of workers right now,” he said. “Now, instead of having to train a new worker from scratch, they’ll be able to hire someone who already has the basic knowledge and can contribute right away.”

Professional HVACR installers may work with residential units, as well as with commercial systems ranging from the air conditioning in a small retail shop to the climate control system for an entire factory. According to the Bureau of Labor Statistics, median pay nationwide for heating, air conditioning and refrigeration mechanics and installers was $22.07 per hour in 2016.

There were more than 294,000 people working in that occupation as of May 2016. The field is expected to grow by nearly 40,000 workers between 2014-24, and that doesn’t count job openings created by retirement and attrition.

There is more demand for air conditioning and refrigeration mechanics and installers in the Southeast than many other parts of the country. In fact, Myrtle Beach had one of the nation’s highest concentrations of HVAC jobs among metro areas, and the Pee Dee region was among the top non-metropolitan areas.

Room is still available in the program for the fall semester, according to Cockrell. Students may qualify for Lottery Tuition Assistance scholarship money. Credits earned in the program will also carry over if a student later chooses to study at PTC for an Associate of Applied Science degree in Heating, Ventilation and Air Conditioning Technology.

For information on the HVACR Installers certificate program, contact Bill Cockrell at (864) 941-8473 or cockrell.w@ptc.edu.