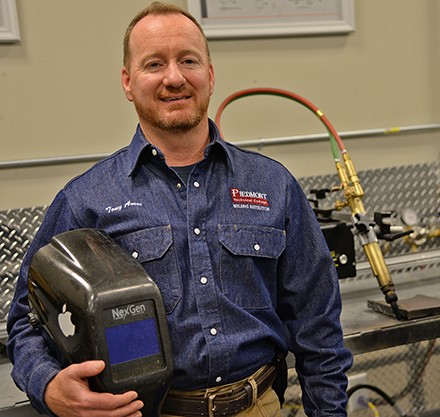 Tony Amos was destined to become a welder. His heart led him to take up teaching.

Amos grew up in Laurens County, graduating from Laurens District 55 High School in 1986 and joined the United States Marine Corps. He started as a diesel engine repairman and worked his way through the ranks to become an instructor. He attended Military Occupational School where he taught diesel engine repair before being selected to serve at the Train the Trainer School (T3S) where the USMC trains and educates military and civilian personnel assigned to leadership and instructional positions. He served as a curriculum developer course chief, where he helped instructors design course curricula based on everyday tasks sent down from headquarters.

After serving 21 years, Amos retired from the Marine Corps in 2007. He still had his GI Bill funding to continue his education, so he explored his options. While he had experience with diesel engines, Amos did not want to go into automotive technology. That’s when he went back to his roots.

“I learned how to weld before I went to high school,” Amos said. “My dad was a welder with his own welding business.”

Amos earned his associate degree in welding from Greenville Technical College and opened his own welding business in 2008. But his heart was always in teaching. He became an adjunct instructor with the welding program at Piedmont Technical College before moving into a permanent position in 2012. He also made the decision to close his business.

“I’ve always loved teaching, so I’m going where my heart calls me,” he said.