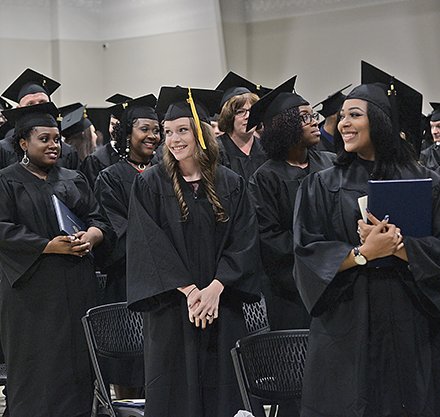 Commencement exercises will begin at 3 p.m. for nursing, industrial technology, engineering technology, agriculture, computer technology and business graduates. A ceremony will be held at 7 p.m. for Associate in Arts, Associate in Science and health science graduates. Both commencement exercises will be held in the James Medford Family Event Center at Piedmont Technical College in Greenwood.

In recognition of their excellence and the stories they have told about their journeys in higher education, four graduating students will be speaking at the commencement ceremony - two in the afternoon and two in the evening.

Katie McCarty has worked several types of customer service jobs throughout her career. She wanted something that would let her work more closely with her customers and open doors for her. The Greenwood resident will be receiving her Associate in Applied Science Degree with a major in Business Administration, Office Management concentration. She plans to move to Winchester, Virginia, with her fiancé, Stephen Dannenmaier, where she will enter the manager training program for a major grocery chain.

Linda Lopez of Greenwood has always had a passion for taking care of others. She enrolled at Kennesaw State University right after high school, majoring in biology. She took a break from school to start a family before enrolling at Piedmont Tech. She will be receiving her Associate in Applied Science Degree with a major in Nursing. She plans to pursue her BSN with the hopes to work in the NICU. Linda and her husband, Josh, have two daughters, Leila and Alina.

Stephanie Johnson of Prosperity seemed to have the perfect career as a Division I assistant softball coach, but an accident changed her life. Rather than sitting around while recovering, she enrolled at Piedmont Technical College. She will be receiving her Associate in Applied Science Degree with a major in Occupational Therapy Assistant. After completing her national certification exams, she plans to return to school to pursue her master’s degree in occupational therapy. An active member of Chapin Baptist Church, where she serves as a children’s worship leader, Stephanie has three children, Aullden, Samuel and Cassidy.

Kimberly Smith has always had a love for health care. The Greenwood native earned her CNA certification and her Phlebotomy Certification, but she still wanted more. She will be receiving her Diploma in Applied Science with a major in Medical Assisting. She plans to return to Piedmont Tech for her associate degree in Medical Assisting, and then pursue a degree in nursing. An active member of Durham Temple CME in Greenwood, Kimberly and her husband, Terrence, have three children, Ja’Tana, Ja’Taza and Braylen.

A special feature of commencement exercises will be recognition of top graduates from Abbeville, Edgefield, Greenwood, Laurens, McCormick, Newberry and Saluda counties.