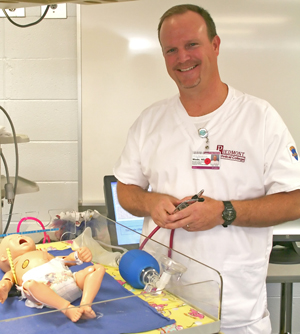 Like many people across the state of South Carolina, Wade Nicholson has had to reinvent himself. He has found the tools for that reinvention at Piedmont Technical College.

Nicholson graduated from Saluda High School and went on to college at the University of South Carolina. College wasn’t what he wanted at the time, so he began working for a large textile manufacturer.

“I quickly figured out that I needed more education to do something more with my life,” Nicholson said.

He enrolled at USC-Aiken and earned his bachelor’s degree. He decided to go into management and spent nearly 12 years working in manufacturing. Then, as the economy began to fall, Nicholson found himself in the same position as many people in the state – he was laid off from his position.

“I had to make some decisions quickly,” Nicholson said. “I thought about going back into manufacturing, but with my education background being in biology and exercise science, I thought I would go into something that was not only fulfilling, but would have a long-term future.”

Nicholson enrolled at Piedmont Tech knowing he wanted to go into the health care field, but unsure of what program he wished to pursue. As he took the general health science courses, he says he had two people who influenced his decision to go into the nursing program - Rosalie Stevenson, interim dean of nursing, who was his instructor in medical terminology, and his wife, Belinda, a registered nurse at Self Regional.

“Nursing is a very broad field,” said Nicholson. “I realized that if I was going to go into a health science profession, nursing had more options available to me.”

He also encourages more men to consider a career in the nursing field.

“From a male perspective, for me anyway, nursing has not always been perceived as a masculine profession,” Nicholson said. “Now that I see all the different options available in the profession, and the number of men coming in or coming into the profession, that stereotype is falling by the wayside.”

Nicholson said that while the classes have been challenging, one of the biggest differences for him this time around is himself. And for those thinking of returning to school, he wants them to know they are never too old.

“My level of maturity plays a lot in being prepared to give the needed time and effort to studying,” he said. “No matter how old you are, you still have the opportunity to do things in life and make things better for their family.”